Buckinghamshire College Group Level 3 Acting students are delighted to invite you to their next production: Arthur Miller's 'The Crucible', with evening performances on 27, 28, 29 March at 18:30 and a special matinee performance for schools on Monday 1 April at 13:00.

Written in 1953, The Crucible was inspired by the Salem witch trials in the Puritan community of Salem, Massachusetts during the late 17th century. There are strong parallels between the play and the ‘witch-hunt’ blacklisting that occurred during the McCarthy era's anti-communist trials that took place in America during the 1950s. Arthur Miller said of the time that he felt he was living in "a perverse work of art.” He said, “In one sense, The Crucible was an attempt to make life real again."

This production is a collaboration between Level 3 Acting, Level 3 Back Stage Theatre, Level 3 Music Performance and Level 3 Creative Media Production and Technology (Television and Film) students. Irene Rambota, Course Leader – Acting for Stage & Screen, says, “As always, it is fantastic to have young creatives from so many departments working together and inspiring each other.  As a play, The Crucible is so ingeniously and sensitively constructed and it has been a fascinating journey bringing this story to the stage. We very much look forward to welcoming you to our College and wonderful theatre!”

Matinee performance: free for schools -  please email This email address is being protected from spambots. You need JavaScript enabled to view it. to book places. 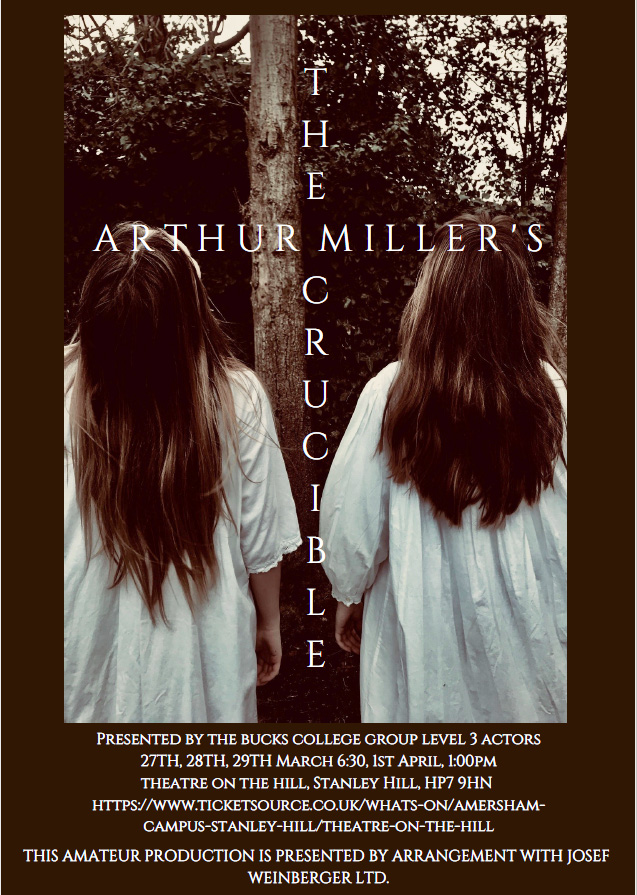